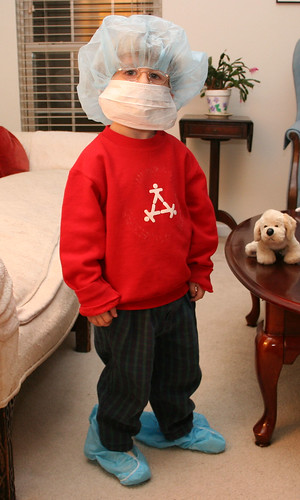 Our (now) five year old, J, used to get heavy fevers about every three weeks. It would spike up to about 103-104 degrees for two or three days and he’d be miserable. During this time he would also have trouble eating, drinking and just breathing. The doctor’s diagnosis was PFAPA, which is still a bit of a mystery regarding causes and treatments.

We’d heard some people’s success with removing tonsils as a treatment for PFAPA, but nobody really knew why that worked, and the docs were reluctant to go to surgery on healthy tissue. However, it became clear that J’s tonsils were affected by the fevers, to the point that he was having trouble sleeping at night because his airway was so constricted. The decision was made that the tonsils were not healthy and should come out. If it happened to help the fevers, then so be it.

J had his tonsillectomy at the U of M hospital one year ago today. The surgeon did a fantastic job, and the recovery was as quick as could be hoped for. The effect on his sleeping was immediate.

It had been about 3 weeks since J’s last fever, which was a really tough one that lasted longer than normal. We held our breath and waited for the next one to occur. Weeks went by, no fever. Months went by, no fever. Now it has been a full year with no fevers and I think we can safely say it’s gone. The increase in J’s quality of life has affected the entire family.

We are so thankful to have our J every day instead of just 18 of every 21.