So our mighty Pistons were unceremoniously dispatched from the NBA Playoffs by Dwayne Wade, Shaq, White Chocolate and the rest of the Miami Heat, leaving me in a familiar position: no local team in the Championship series (see Red Wings, Tigers, Lions, and my beloved Wolverines).

But I’m a sports fan, right? I need to watch the championships of one of the major professional sports in this country, just to keep my cred as a sports geek. But even though I have no particular interest in either Dallas or Miami becoming the next champion of the NBA, I have a basic need to pick a team to root for in any sporting event I watch. It just makes the game more enjoyable.

So who to pick? There are a couple of different ways to go on this:

Pick the team that beat your team:

I think the feeling here is that you can say your team wasn’t the best, but they lost to the best, so they can consider them #2, even if they aren’t in the championship. Sometimes I can go for this, such as one of the reasons I am currently rooting for the Oilers in the NHL Finals.

I’m not sure the bruises from the Miami beat-down of Detroit have healed enough for this to work.

I always like the underdog rising up and creating a good upset. Perhaps a bit of schadenfreude when I think about it, but great upsets are some of the best games in sports history: Super Bowl III, and the Miracle on Ice to name a few. This is another reason to root for the Oilers (a #8 seed) in the NHL finals.

But does that apply here? The Heat were the #2 seed, and Dallas was a strong #4 seed (second only to the #1 team in their division). So no obvious underdog here.

Dallas? No strong feeling. Miami? Well… No real hatred, but there’s a definite leaning to partial dislike there. But that’s not enough. I need…

This man is the reason I’m rooting for the Mavs: 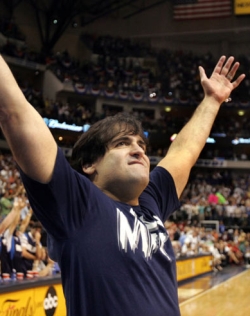 Mark Cuban owns the Dallas Mavericks. Mark Cuban is a geek. He should be the hero of every self-professed sports geek in the world. This man started up a streaming audio service in his bathroom with a single HP server and an ISDN line and transformed it into Broadcast.com, which he sold to Yahoo for over 5 Billion dollars. Yes, that’s Billion with a ‘B’. And he started it to be able to personally listen to basketball games. He has a blog. He puts his email address on the jumbotron for fans to contact him. He’s still involved with current geekery such as HDTV technologies. He speaks his mind, has a sense of humor, and knows more about hardcore technology than I ever will. Mark Cuban is the sports geek’s dream. And that’s why I’m rooting for the Dallas Mavericks.