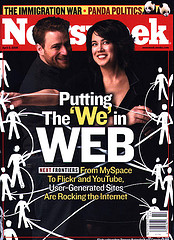 I think Newsweek did an admirable job, covering MySpace, Flickr , and YouTube in depth, as well as mentioning technology such as RSS, AJAX, APIs and mashups. But I think they did the best at focusing on what The New Web is all about: user-created content. They are letting people understand that the web is not just another consumer media such as TV, radio, and newspapers, but it’s becoming a interactive media where you can share your knowledge, thoughts and opinions. Rather than getting cought up in the technologies of RSS, tagging, and APIs, I think it’s important for the casual observer to understand the foundational concept of The New Web. Once they get the “why”, they can support and explore its further development.

Newsweek also had an article titled “Who’s Building the Next Web?” which listed eight companies working on emerging technology. I’d only heard of two of them, and I consider myself relatively knowledgeable about the web. Interesting ideas, if nothing else.
Digg - link sharing
Plum - information collections
Sharpcast - document sharing across all devices
Jajah - two local calls connected over the internet
Prosper - person to person lending
la la - learn about and share music
FlimLoop - scrolling images easy to download and share
Mercora - easy online radio station

Now some of the other content of the magazine, such as a “geek quiz”, complete with an image of a “geek” littered with random techy gadgets straight out of central casting, was a little disappointing. I mean, “subtract 1 pt. for each nonworking computer”? Come on, every real computer geek has a dozen or so non-working computers in boxes somewhere. Also, they lose all cred for not listing the Gamecube, GBA or DS in their “Which game system are you playing most often today?” question.

So now your mom knows. And let me tell you, your uncle Louie’s MySpace is pretty scary.